The research area of PermLab is summarized in the following figure: 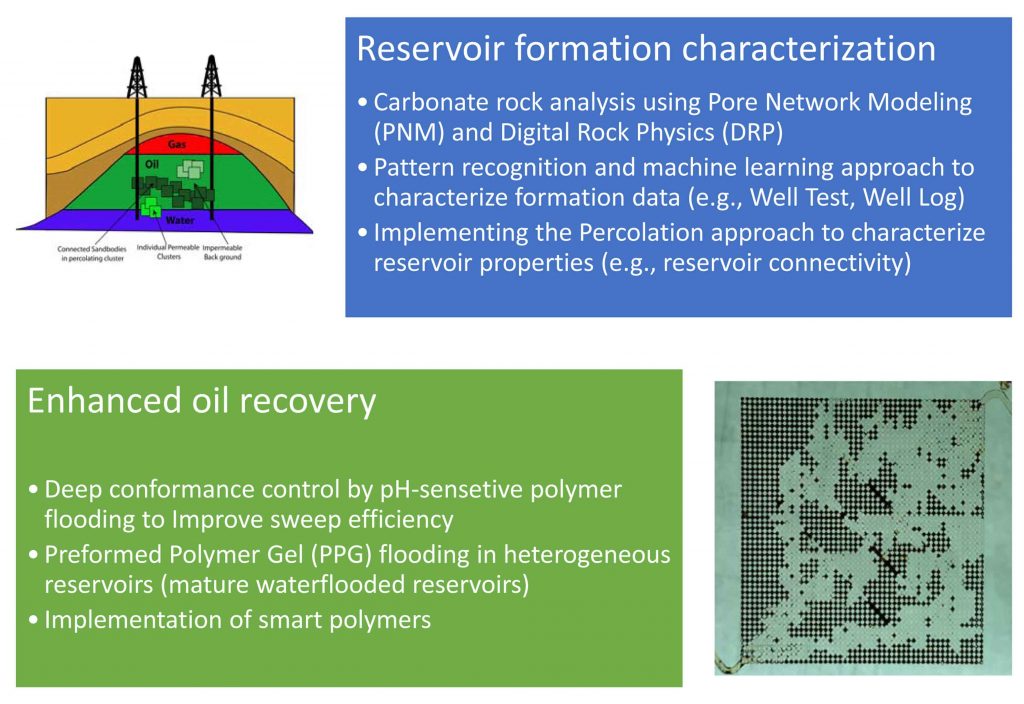 Predicting petrophysical properties in carbonate reservoirs is a challenging task due to the nature of the deposition and diagenesis, which depends on pore-scale features and heterogeneity at multiple length scales (Sok et al. 2010). The pore/throat size distribution and morphology of a carbonate rock strongly influence its petrophysical properties (e.g., porosity, permeability, capillary pressure, etc). The presence of multiple length scales in pore-size distribution (and the interconnectivity of pores) of carbonates is what fundamentally differentiates them from sandstones (Prodanović et al. 2015). Pore Network Modeling (PNM) is an approach for depicting flow behaviors in complex pore space morphology, which can help in clarifying the rock properties that are difficult to get using the present experimental methods (e.g., SCAL). In the PNM approach, the porous domain is mapped onto a set of pore bodies of different sizes connected through variable diameter pore throats. This method tries to predict fluid transport properties as a function of porous structure (e.g., porosity, pore sizes, coordination number, distribution of pore sizes, tortuosity) with the relevant physics implemented on a pore-to-pore basis. In this field of study, a new computer-modeling algorithm to reconstruct bi-modal vuggy porous medium was introduced by coupling pore-network modeling approach with image-based network techniques (Sadeghnejad & Gostick 2018, Sadeghnejad & Gostick 2019). This approach implements image-processing techniques to generate a two-dimensional lattice-based network of secondary porosity (i.e., vugs) on top of an initial pore network model at the pore scale. The resulting multi-scale model can efficiently preserve vug-to-vug and vug-to-pore connectivity through generating throats with proper sizes and lengths. 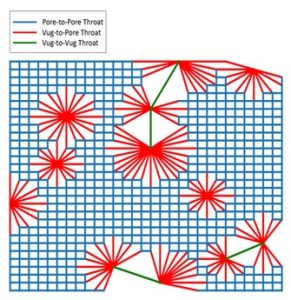 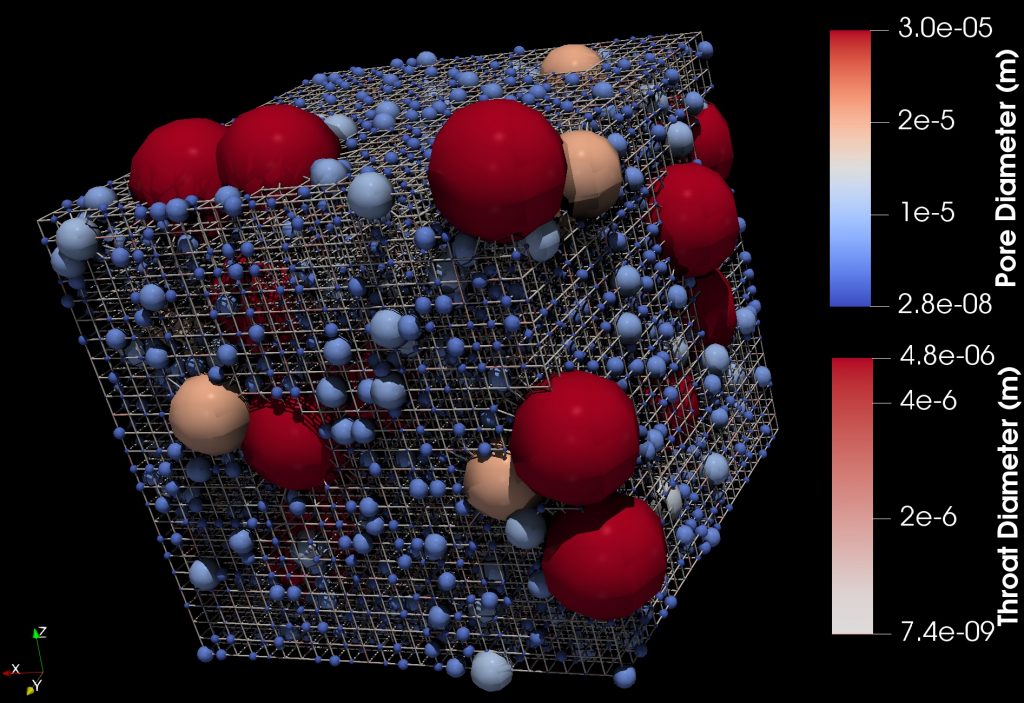 Moslemipour & Sadeghnejad (2020) implemented a dual-scale PNM to reconstruct the behavior of the same vuggy carbonate sample. The rock sample was CT scanned at two different scales. At the macro-scale (i.e., vugular-network), a medical-CT scanner was used to image the rock sample at the resolution of 100 μm. For better visualization of macropores (i.e., vugs) of the rock sample, imaging was conducted at both dry and saturated states with an X-ray attenuating brine (i.e., NaI solution). The rock was also imaged by a micro-CT scanner at the resolution of 0.75 μm to extract the micro-scale properties (i.e., micro-network). The images at both scales were preprocessed first. Then, the networks of both scales were extracted by two network extraction algorithms (i.e., the sub-network of the over-segmented watershed (SNOW) and the Maximal Ball (MB) method, and the results compared together. Then, a stochastically equivalent network based on the extracted micro-network properties was generated with a larger field of view (FOV). Then, vugs were randomly added to the reconstructed micro-network based on the properties of the macro-scale CT images. The result was a dual-scale unstructured irregular PNM. The results reveal that the reconstructed dual-scale PNM has very close properties to the laboratory measurement data of the real rock sample. 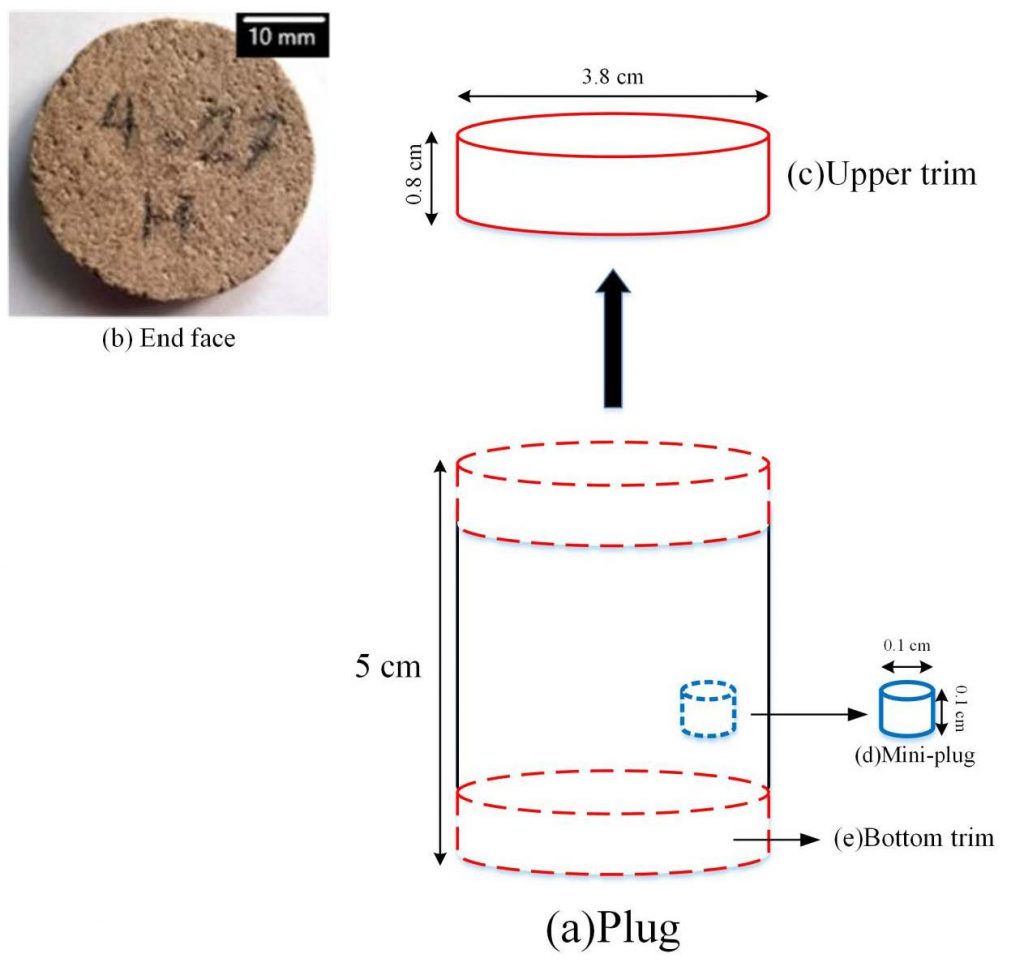 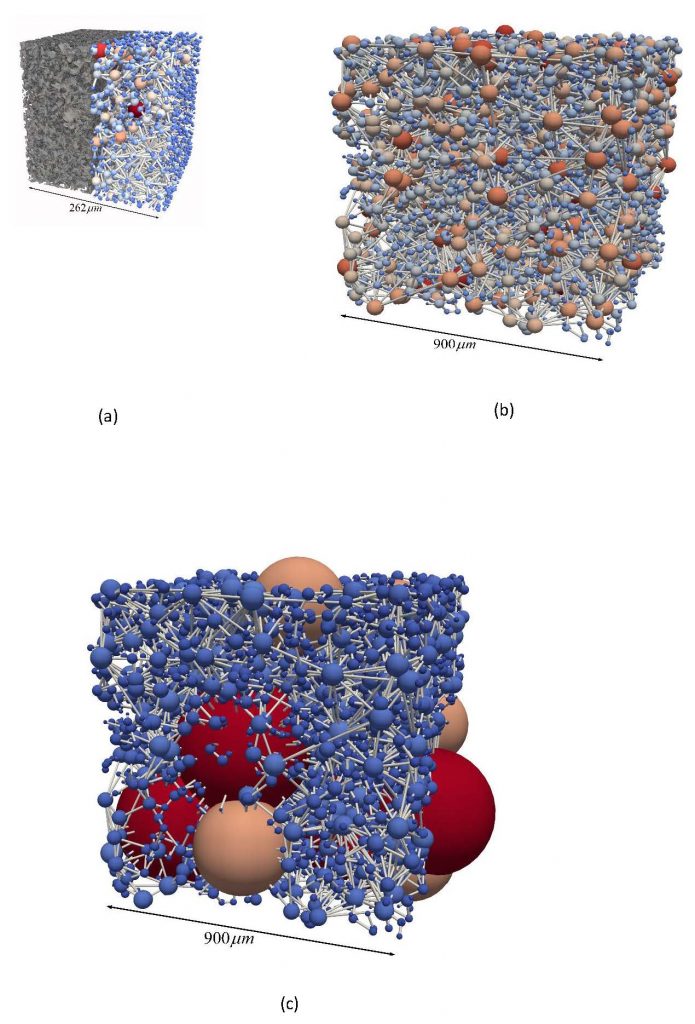 Different steps of pH-triggered polymer flooding. a) Water breakthrough during conventional water flooding process because of its flowing through high permeability areas; b) acid pre-flush in order to decrease the pH of the high permeable areas; c) Injection of pH-triggered polymer that has low viscosity in an acidic environment; d) Post water flooding with the  higher sweep efficiency in comparison to (a) (Younesian & Sadeghnejad 2018)

3-Reservoir Characterization
Well-to-well correlation plays an important role in the characterization of hydrocarbon formations. Recognition of geological boundaries to provide a 3-D geological model of a formation is an essential task. The common sets of data that are used to build a geological model include welllogs, cores, and seismic data. Available cored wells are usually limited and the entire area of a field is not surveyed geophysically; nevertheless, logging operations are widely performed in most wells. Therefore, well-logs due to their availability are a desirable source for stratigraphic correlation (Perez-Muñoz et al., 2013). Well-to-well correlation is usually performed manually and usually involves a large amount of visual and qualitative analysis on big data sets. Thus, there is a need to introduce automatic approaches that can assist interpreters during well-to-well correlations. To do so, we at Permlab, try to speed up the well-to-well correlation process by introducing an automated approach (Partovi & Sadeghnejad 2017). This algorithm automatically searches for similar depths associated with those geological boundaries in other wells. The fractal parameters of well-logs, which are calculated by wavelet transform, are considered as pattern recognition dimensions during the well-to-well correlation approach. To validate the proposed technique, it was implemented in several wells of Iranian fields. The results show the capability of the introduced automatic method in the detection of geological boundaries during the automated well-to-well correlations (Partovi & Sadeghnejad 2018). 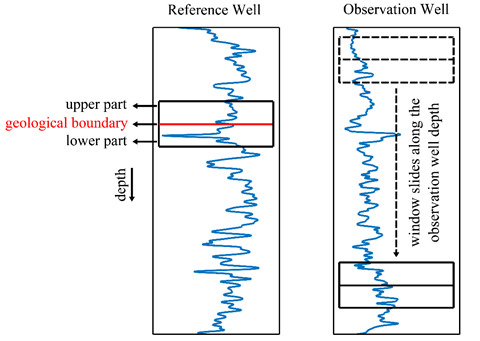 The connectivity and conductivity (permeability) of a porous medium control the performance of production (e.g., recovery factor). Different methods were implemented to estimate these key properties. Percolation theory is one of those methods, which has many applications in fluid flow in porous media. The importance of this methodology can be revealed when reliable input data for reconstruction of a detailed porous media is not available (e.g., during the initial production life of a hydrocarbon formation) (Sadeghnejad et al. 2011a, b, 2014). This theory implements some scaling functions to predict the behavior of porous media (Sadeghnejad et al. 2012, 2013a).

Percolation theory is implemented using different approaches, e.g., site and continuum percolation. The classic site percolation approach is composed of a square lattice system, wherein objects are randomly distributed throughout system sites that their locations are fixed; whereas, in continuum percolation, objects may overlap each other. The classic percolation theory is based on connectivity between the opposite sides the system (Sadeghnejad et al. 2013a, b). While, in a formation with injectors and producers, the connectivity is between two points (in 2-D) or two lines (in 3-D). Therefore, point-to-point (Sadeghnejad et al. 2016a, b; Sadeghnejad & Masihi 2016; Javaheri & Sadeghenjad 2017; Soltani & Sadeghnejad 2018) or line-to-line connectivity (Sadeghnejad & Masihi 2017) may provide better connectivity predictions. 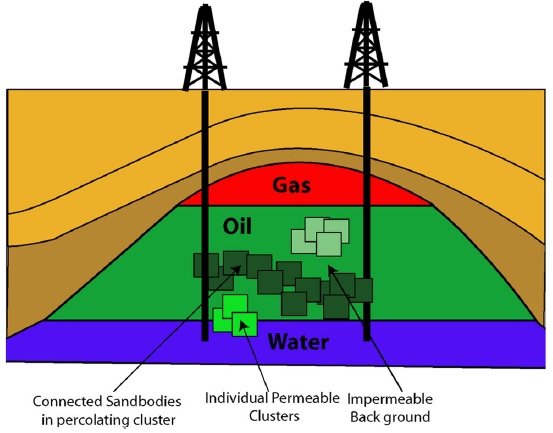 Soltani, A., & Sadeghnejad, S. (2018). Scaling and critical behavior of lattice and continuum porous media with different connectivity configurations. Physica A: Statistical Mechanics and its Applications.